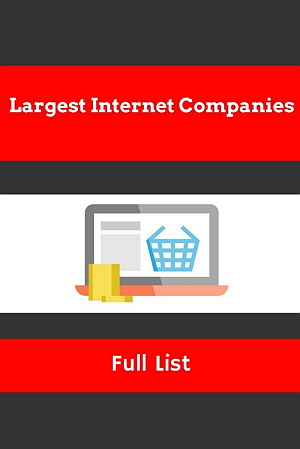 Since the invention of the internet, there has been an increase in the number of internet companies.

Today, internet companies have grown to be among the biggest ones in the world in terms of revenue, the number of employees, and even inventory.

Given that the internet is here to stay and that each day presents the possibility of a new internet solution, we can only expect these companies to keep growing.

Below is a list of internet companies by revenue and market capitalization.

Keep in mind that this list includes only those companies that do the majority of its business on the Internet.

Meaning that it excludes internet service providers or other information technology companies that do most of the business outside the internet.

10 biggest internet companies in the world are (sorted by revenue):

On 5th July 1994, Jeff Bezos founded Amazon in Bellevue, Washington. What we know today as the world’s largest eCommerce platform started as an online bookseller, before going on to include other items its inventory.

Currently, Amazon has a workforce of 798,000 employees, making it the biggest employer among internet companies. Before 2015, Walmart was the most valuable retailer in the US. However, Amazon surpassed that and first reached the $1 trillion market cap on 4th September 2018.

Google is, by far, the most recognized internet company today.

Although most people know of the company’s search engine services, Google also has interests in cloud storage and social media, evidenced by its products Google Drive and Google Plus, respectively. The company also offers video sharing services via YouTube, work and productivity services via Google Docs, Sheets, and Slides, and photo organizing via Google Photos, among others.

Larry Page and Sergey Brin are the brains behind Google, which they founded in 1998 while taking their Ph.D. degrees at Stanford. Initially, the company aimed to modify the existing search engines then but later expanded to include other services.

The move saw the two founders assume executive roles in the new company, with Sundar Pichai as Google’s new CEO. Google generated total revenue of $161.857 billion in 2019 and has around 118,899 employees.

With the total revenue of $69.823 billion, the Chinese-owned eCommerce company is our third one on the list.

Although Liu Qiangdong founded Jingdong in 1998, the eCommerce platform went online in 2014 and was initially known as 360buy.

Jingdong has its headquarters in Beijing and is a member of Fortune Global 500, an annual ranking of the 500 top corporations globally by revenue.

When starting, Jingdong had its focus on magnetic and optical instruments. However, the company expanded its operations to include electronics and general merchandise.

Today, JD.com is a leading company in the AI and high-tech fields, with a particular focus on drones and autonomous technology. Since 2017, the company has been exploring driverless delivery through drone-delivery services.

Company operations run under two segments; JD Mall and New Businesses. JD Mall is the core eCommerce platform for the company, while the latter includes overseas business, technology services, and other services to third-parties.

JD is China’s most significant retail employer, with 220,000 employees.

Alibaba Group Holding Limited has its headquarters in Hangzhou, China.

The company was founded in 1999 by Jack Ma and has grown to become Asia’s largest retail and eCommerce company and has global users.

Alibaba is well-known for its business-to-business (B2B), consumer-to-consumer (C2C), and business-to-consumer (B2C) services and hosts the world’s largest marketplaces for the named services.

These marketplaces are Alibaba.com, Tmall.com, and Taobao.com.

The company also provides cloud computing and mobile media and entertainment services. The two significant subsidiaries that run under the company are Alibaba and Aliexpress. The former is in charge of the wholesale business, while Aliexpress primarily handles the retail sales.

The company went public in 2014, recording the highest IPO in the world at $231 billion with a listing on the New York Stock Exchange.

The 2018 edition of the Chinese holiday, Singles Day, raked $30.8 billion for Alibaba, which set a new sales record for the shopping holiday.

Alibaba Group Limited hit the $500 billion valuation mark in January 2018, becoming the second Asian company- after Tencent- to do so.

When Mark Zuckerberg and three of his friends gathered in their Harvard dorm room to start Facebook in 2004, they had no idea that the company would grow to become the most popular social networking site globally.

Initially, membership was only available for Harvard students, before the founders opened it up to other Ivy League schools, and finally to anyone above the age of 13 in 2006.

Facebook’s Initial Public Offering was on 1st February 2012 and raised $16 billion, the third-highest IPO sale in US history. The sale saw Facebook surpass several US companies in market capitalization, although the company struggled to maintain its IPO price after its listing on NASDAQ on 18th May 2012.

Please confirm deletion. There is no undo!
Send this to a friend