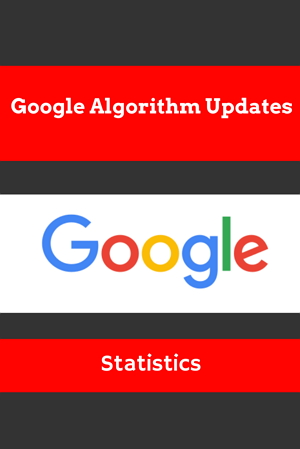 Google is rolling out hundreds of search algorithm updates each year.

Most of the time we don’t even feel it.

However, a small proportion of them has a much greater impact.

Some sites are enjoying increased traffic, while others are losing everything.

Are there any trends when there’s the highest chance to face the Google search algorithm update?

That’s what this analysis will try to answer.

How the Data Has Been Collected

However, keep in mind that in this analysis there were included only those updates that had a significant impact on Google search rankings (for example, official updates confirmed by Google and unnamed updates causing heavy ranking fluxes).

The Number of Google Search Algorithm Updates by Year

Since 2011, Google has rolled out an average of 11 algorithm updates per year. That’s almost one update every month.

As you can see from the chart above, in 2012 Google released a staggering amount of algorithm updates (24 to be exact), which is almost twice as many as any other year.

It was also the year when another update of the Google algorithm called Penguin was born, which was created to fight against unnatural links and their schemes (also known as webspam).

In subsequent years, the number of algorithm updates decreased significantly and generally ranged between 5 and 13 updates per year.

The Number of Google Search Algorithm Updates by Month

Looking at the number of Google algorithm updates by month, there is no such a clear winner as there was when looking at statistics by year.

However, as you can see from the chart above, most Google search algorithm updates are launched in May.

The most interesting fact is that since 2011, only in 2019 there has been no major update in May. However, we didn’t have to wait long for that as the “core” algorithm update was launched on the 3rd of June of the same year.

Also, apart from May, February, September, and October are other months when there is also a fairly high chance that a new algorithm update will be rolled out.

Meanwhile, the lowest probability is in March, April, and August.

It’s also quite interesting to see how this data varies on a quarterly basis.

The Number of Google Search Algorithm Updates by Quarter

However, we can clearly see that the first quarter is the least active in terms of the number of updates, and the second quarter is way more active.

The Number of Google Search Algorithm Updates by Weekdays

As the data collected shows, most updates to the Google search algorithm were released on Tuesdays.

Probably not at all.

Since it’s a fairly common practice to launch larger updates earlier in the week, in case there will be a need for the human resources to fix something that doesn’t work well.

However, as you can see you can’t also feel completely safe even during the weekend because a small batch of updates has been launched on weekends as well.

Google Search Algorithm Updates by Days of the Month

As can be seen from the graph, most updates were launched on the very first day of the month.

However, it is also important to note that until 2011, these updates were always either launched or officially announced on the first day of the month.

But things changed dramatically in 2011 when Google stopped following this policy and algorithm updates were started to be released on any random day.

So, if we filtered out the data up to 2011, then the chart would look completely different and this day would become completely unexceptional.

And here we can see a little different data.

It turns out that most of the Google algorithm updates were rolled out on the 27th day of the month.

More interestingly, after this day till the month, such updates were extremely rare (or not made at all).

What Are the Most Common Days of the Year When Google Search Algorithm Updates Were Rolled out?

It was also very interesting to see if there are any recurring dates when Google Algorithm updates happen.

However, as can be seen from the graph, the dates are quite widely distributed and it certainly could not be said that any day of the year stands out more.

The only date that stands out more is September 27th.

So far, there have been 4 updates to Google’s algorithm on September 27th:

Sadly, there’s too little data yet, but it definitely means something since this day is just before the 4th quarter of the year (which as we know is the most profitable quarter for the Alphabet company).

When Will the Next Google Search Algorithm Update Happen?

That’s it for this time.

As can be seen from the data above, the next Google algorithm update can happen on virtually any random day.

However, we can see a small trend that Google algorithm update is much more likely to happen somewhere on a Tuesday in May or September.

What’s your opinion about this data?

When do you think the next Google Algorithm update should happen?

Hey – This is one of the best articles I have read on statistics of Google algorithm updates. You have covered the updates in great detail and have analysed previous major updates wonderfully. However, from your study, can you provide a few forward looking statements such as what Google is more likely to do over the next couple of years looking the trends since 2011 and extrapolating it till 2022-23? That shall be really helpful. Thank you so much for sharing this post. Loved reading it.

I’ll try to take a look into it.

Hi, One on the best article I have come across so far! Very well researched.

Really helped me understand about Google algorithm’s history and when to expect an update From this data you can clearly see a pattern.

I knew how Googles felt about low-quality content and rewards unique, compelling content, now i know when these were rolled out.

Hey, I found the article impressive. So much search on Google algorithm updates.

You covered all the Google updates details. Keep on updating it.

Please confirm deletion. There is no undo!
Send this to a friend