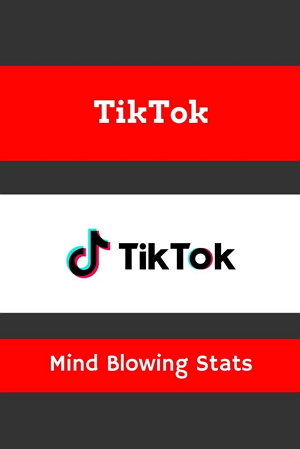 Are you looking for a piece of trustworthy statistical information about TikTok?

Unless you have been living under a rock for the past few months, you must have heard of the now popular social media platform, TikTok.

Over the last few months, this TikTok has been taking the internet by storm, with many people, both old and young taking to it.

However, there’s one problem:

It’s hard to find sources that would cover all the most important stats and facts about TikTok.

…I’ve pulled together some of the most interesting and relevant TikTok statistics, facts, and trends that you should know if you’re involved in this market.

Here are the most important TikTok statistics you need to know:

1. How Many Users Does TikTok Have?

Since its launch in 2017, TikTok has grown to have over 800 million monthly active users.

This has been quite a leap for the platform, considering Instagram took about six years to hit that number, and Facebook took over four years to achieve the same.

2. How Many Downloads Does TikTok Have?

TikTok has been downloaded over 1.5 billion times.

In November of 2019, ByteDance announced that TikTok had been downloaded over 1.5 billion times on the App Store and Google Play.

The app crossed the one billion and the 1.5 billion milestones in the same year after it hit the former mark in February of 2019.

From the provided statistics, India was the leading country in TikTok statistics, attributing to about 31% of all the downloads.

Given that the platform took a little under nine months to gain half a billion users since February of last year, TikTok could well be on its way to surpass popular veteran social media platforms.

3. How Much Time Users Spend on TikTok?

An Average TikTok user spends 52 minutes per day on the app.

Statistics show that the average user spends a little under an hour each day on TikTok; 52 minutes to be precise.

In comparison to other apps, users spend about 53 minutes on Instagram, and Facebook retakes the lead with an average of 58.5 minutes daily from the average user.

4. In How Many Countries is TikTok Available?

TikTok is available in 155 countries.

Over the past four years of its existence, TikTok has been released in 155 countries across the world.

This places it in the top 1% of the global rank of apps that have penetrated the most number of countries.

One of the crucial factors that encouraged the adoption of TikTok in different countries stems from the fact that Musical.ly had gained popularity in the Western world, while TikTok was popular in the East.

TikTok has been able to obtain a considerable following in other Asian countries even as China runs a separate version Douyin to adhere to the Chinese internet restrictions.

Perhaps one of the areas where TikTok continues to shine is in the Asian countries.

The platform has gone ahead to support 15 Indian languages to help increase its reach in the area.

Increasing the number of languages that the platform supports helps in catering to the local population.

TikTok has further launched an education program in India, which is the first of its kind by the platform.

5. How Many TikTok Videos Are Viewed Each Day?

More than 1 billion videos are viewed on TikTok every day.

With a platform of over 800 million users, you can only imagine that there is a considerable number of videos being created on the platform each day.

The number is even higher than that of users because anyone with a TikTok account can simply log into the platform to view videos.

In total, people across the world viewed about one million TikTok videos each day during its first year of existence.

This comes as no surprise since statistics have previously proven that videos are likely to attract a more substantial following than any other element on social media.

Given the vast number of videos that users are viewing on the app, marketers can leverage a lot from TikTok.

Digital marketing is continuously evolving, and perhaps you will have to set up a TikTok account to help you reach the massive audience of the 800 million users already on the platform.

6. From Which Countries TikTok Users Come From?

TikTok has the most users from India, China, and the USA.

Of the 800 million users on TikTok, India, China, and the USA take the lion’s share of this number. India leads the list with 466.8 million users, translating to about 31%.

China comes in second with a total of 173.2 million users and the United sates following closely with 123.8 million users.

7. TikTok is the #1 Most Downloaded App on the Apple App Store

During the first quarter of 2019, TikTok topped the charts as the most downloaded app on the Apple store.

This statistic marked its fifth consecutive quarter at the position, which is quite impressive.

This straight run suggests that the platform can retain its customer base while attracting new users to it.

For the first quarter of 2019, there were 33 million TikTok downloads, which ultimately set it apart from other popular platforms like WhatsApp and Facebook.

However, TikTok was the third-best performing app for downloads on both GooglePlay and App store, coming behind WhatsApp and Messenger.

8. How Many Users Access TikTok on a Daily Basis?

90% of all TikTok users access the App on a daily basis.

Although most will log in to make, edit, and post some of their videos, other users are passive and will only get on there to view others’ videos.

Most apps usually have high download rates but record worrying rates when it comes to usage.

TikTok is quite the opposite seeing as most of the people who own an account actually use it.

Sure, most people prefer to watch videos rather than upload their own, but the numbers are still quite mind-blowing.

9. Who Has the Most Followers on TikTok?

charli d’amelio is the #1 Most Followed individual on TikTok (with over 61 million followers).

Charli D’Amelio is an American social media personality and dancer.

As of June 8, 2020, she has accumulated 61.4 million followers on the social video sharing app TikTok, and has been called the “reigning queen of TikTok” by the New York Times.

It is a well-known fact that youngsters are usually the majority of users for any social media platform.

However, TikTok has certainly hit home with this and records a staggering 41% of its users as being between the ages of 16 and 25.

Unlike other apps that usually make some breakthrough with the older generation, most of the older population have not heard of TikTok and could not use the platform to save their lives.

Well, we could attribute this t the fact that the developers targetted the younger generation of users under 18 years from the beginning.

Besides, the very nature of the platform is that it allows users to express themselves through dance, lip-syncing, or other creative forms.

This undoubtedly appeals more to the younger generation, who are continually looking for ways to be creative.

From the above statistics, it is no doubt that TikTok is quickly gaining dominance in the social media scene.

Within just a short time, the app has been able to gain some impressive numbers all around the world.

With the above statistics, it is clear that TikTok could be the next big platform for young users across the world.

Therefore, if you are looking to advertise products or services that target the members of Generation Z, perhaps you should be looking for ways to do that on TikTok.

Marius, Thanks for the TikTok stats. TikTok is popular especially with teens.

TikTok over time has been for everyone. I’ve seen it reach a large variety of people. As a marketer, we have to keep up with all trends and take into account if it will be worth it to be on that platform.

List of Largest Internet Companies in the World (Ranked by Revenue)

TikTok Statistics That Marketers Should Know

11 Entrepreneur Statistics You Need To Know

Top 20 WordPress Stats That Every Webmaster Should Know

25 Branding Stats You Must Know to Improve Your Brand