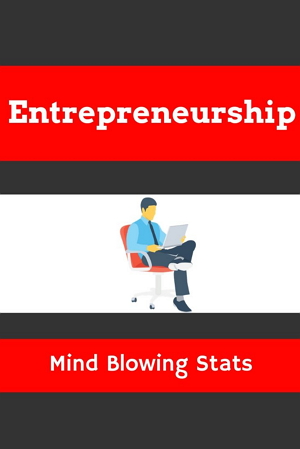 Are you looking for a piece of trustworthy statistical information on entrepreneurs?

Entrepreneurship has been a popular topic of interest for quite some time now.

Many ambitious and energetic youngsters have turned to entrepreneurship attempting to be their own bosses.

However, there’s one problem:

It’s hard to find sources that would cover all the most important stats and facts on entrepreneurs.

…I’ve pulled together some of the most interesting and relevant entrepreneur statistics, facts, and trends that you should know if you’re involved in this market.

Here are the most important statistics on entrepreneurs you need to know:

1. How Many Entrepreneurs Are There in the US?

There are 582 million entrepreneurs in the world.

Global Entrepreneurship Monitor surveyed 65 different global economies and determined that there are more than 582 million individuals who own or are starting a business.

This is a huge number that shows how much entrepreneurship has become a popular alternative for workers.

This immense increase of entrepreneurs seems to have been facilitated by the availability of modern ways to start and run a business.

Entrepreneurs have significantly benefited from the improvement of education, communication and transportation infrastructure, social institutions, and relatively stable economies.

2. How Many Billionaires Are Self-Made?

62% of US billionaires are self-made.

Wealth X and WSJ custom studios set out to crunch the numbers for us and give us a detailed report on the number of self-made billionaires in the US.

The US alone has about 585 Dollar Billionaires.

About 62% of these billionaires are solely safe made – having built their wealth from the ground up.

Again, about 20% of US billionaires became rich through inheritances, while 18% made it to the list by combining both inheritances and individual efforts.

3. What Is the Average Age of Successful Entrepreneurs?

60% of people who start small businesses are between the ages of 40 and 60.

Guidant Financial resolved to take a closer look at the age range among entrepreneurs and other small business owners.

According to their findings, the age range for entrepreneurs is quite broad, starting from millennials, to Generation X, to Boomers and finally to the Silent generation.

Millennial business owners operated 12% of all businesses, while generation X held a substantial 44% stake in the business share.

Boomers owned 41% while the silent generation commanded only a 2% stake.

If you are trying to figure out if it’s too late or too early for you to start your business, guess what, this is the right time, and neither are you too young to start.

Entrepreneurship has become open to people of all age groups with enough desire to push forward.

In the MIT study in 2018, it was found that the average age of startup founders is about 42.

In the same light, the mean age of entrepreneurs who founded exceptionally high-growth companies was found to be 45.

4. How Many Americans Are Starting or Running Their Own Business?

Currently, there are 25 million Americans who are starting or already running their own business.

US residents seem to have a knack for entrepreneurship.

Approximately 57% of American residents recognize an excellent and lucrative opportunity to venture into business.

Compared to the other top 26 innovation-driven economies, the US ranks highest with the others averaging about 41%.

In a Global Entrepreneurship Monitor report of the state of entrepreneurship in the US in 2016, over 25 million Americans were actively involved in creating or running a business.

What percentage of businesses fail in the first year?

This means that approximately 22.5% of small businesses fail in their first year.  This is because of a wide range of reasons, such as poor planning and low market demand. This is according to this government study conducted between 2004 to 2014.

5. Who Starts the Most Successful Businesses?

With all the buzz on young entrepreneurs on the Internet, many would assume that teenagers start the most successful businesses.

In reality, however, the few famous cases of successful young entrepreneurs do not reflect the generalized picture.

In an analysis conducted by Harvard Business Review, TechCrunch award winners over the last decade had an average age of 31 at the time of the founding.

Similarly, the average age of Inc. Magazine nominees for founders of the fastest-growing companies in 2015 was 29. Harvard Business Review attempted to look a little deeper and come up with a more relatable finding for the entire business world.

After analyzing all business founders in the US, 40 with significantly wider variations depending on the industry.

6. What’s the Biggest Motivation for Starting a Business?

Entrepreneurs across the globe are motivated by different reasons to venture into business.

26% of entrepreneurs are fascinated by the idea of being their own boss, achieving unlimited success, the chance and opportunity to grow and develop, among others.

With the endless reasons for starting a business, most entrepreneurs seem to be primarily driven by the desire to be free and become their own boss.

More than 50% of new business owners shared this opinion according to the research by Cox Business.

The research also points out that most of these entrepreneurs like the idea of building a business from the ground up.

Shockingly, money isn’t a significant reason for starting a small business, according to the research respondents.

An astonishing 8% of the respondents admitted that getting more money was their primary motivation for starting a business.

7. What Percentage of Business Owners Have a Degree?

95% of entrepreneurs have at least a bachelor’s degree.

Although most notable entrepreneurs with billions of dollars in net worth have a history of dropping out of college, many entrepreneurs have pushed through with college education to the end.

About 95% of entrepreneurs have attained a bachelor’s degree or higher.

College education appears to be an excellent recipe for most entrepreneurs.

However, this bachelor’s degree doesn’t have to be in business.

In essence, only about 9% of entrepreneurs hold a Bachelor’s degree in business.

8. How Many Americans Are Full-Time Self-Employed?

Americans seem to love the idea of independence.

Many Americans are turning to entrepreneurship as their primary source of income.

According to this research, about 15 million Americans are full time self-employed.

Although the number of entrepreneurs is continually increasing, this does not mean that it is the best route for everyone.

10. How Many Businesses Survive the First Year?

Despite all the popularity and admiration that surround entrepreneurship, it is undoubtedly not a bed of roses.

A 2014 to 2015 report mentioned that about 80% of business establishments made it through the first year of launching, the highest survival rate ever recorded since 2005.

Similarly, approximately only 50% of these businesses withstood the test for five years – which was also an improvement from 45.4% average survival rate in the past decade.

Unfortunately, the percentages keep going further down the drain, with only a third of businesses being able to sustain themselves for a decade or longer.

So, depending on the duration, the success rate of entrepreneurs varies significantly.

If we consider ten years of survival, just slightly over a third of new businesses, make it this far.

11. Where Do Most Americans Start Their Businesses?

69% of American entrepreneurs start their business at home.

More than half of this number still proceeds to operate from home even when these businesses are off the ground and running.

While it’s natural to think that these business owners may probably have one co-founder or operate solely, only a fourth of these numbers had no employees.

In today’s world, more and more people are working virtually.

Another interesting statistic is that 82% of the startup funds came from the entrepreneurs themselves or from either friends or family.

This translates to 1 out of 1,000 entrepreneurs receiving funding from venture capitalists.

TikTok Statistics That Marketers Should Know

11 Entrepreneur Statistics You Need To Know

Top 20 WordPress Stats That Every Webmaster Should Know

25 Branding Stats You Must Know to Improve Your Brand

Internet in Numbers (80+ Mind Blowing Stats About the Internet)

29 Book Sales Statistics Based on Real Numbers And Studies

26 Paid Search / PPC Stats And Facts You Should Know

SEO in Numbers (36 Mind Blowing Stats You Need to Know)